When Luca Guadagnino came on board as the director of “Call Me by Your Name,” he immediately moved the film from the Italian Riviera – where it was set in André Aciman’s novel – to the town of Crema in Lombardy where he lived. Cinematographer Sayombhu Mukdeeprom, working with director Luca Guadagnino for the second time, had an unusual request: he wanted to shoot the film with just one lens. Interview.

“The producer asked me if I wanted something different, a wider lens? Just in case… I said no. I want to stick to this approach because that’s how I work,” says the cameraman. “I think if you limit yourself, you’re fighting within the boundaries of your idea.”

As enthusiastic as Mukdeeprom was about the one-lens idea, when he finally got the green light to employ it, he wasn’t so sure that it was right for the film at hand. For the DP, it would take a thorough vetting of the film’s location to lock in his approach.

The Thai cinematographer visited the region three years prior to production, he could instantly see how the landscape and summer light shaped how the director saw the film.

“I’m from South East Asia and where I live is on the equator, so everything is equal the whole year – the night and morning light is awful,” said Mukdeeprom. “But in Italy the quality of light is surprising, because it’s drier, so the color and contrast is so much better and changes in subtle, poetic ways. I fell in love with it.” 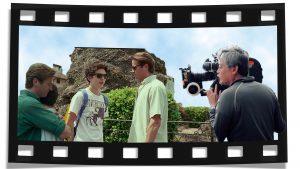 Producer Peter Spears said it was beautiful watching Mukdeeprom and Guadagnino walking through the locations and bouncing off each other as they got excited about the light and feel of the film. “Luca was so aware of how the film would feel, where he wanted to shoot and when to shoot it,” said Spears.

The babbling creek they planned to shoot – the script had to be adjusted for a pond – became whitewater rapids, actors had to suck on ice chips so the camera couldn’t see their breath, and of course, there was very little sun.

“We had scheduled 30 days of shooting – five weeks, six day weeks – and we ended up shooting 34, of which 28 there were heavy rains,” said Guadagnino. “We were freaking out and we’re reconstructing the light every day.” The modestly budgeted film offered little flexibility, as did the calendar with both fall and Guadagnino’s prep on his “Suspira” remake around the corner. Luckily for the producer and director, their new cinematographer was used to shooting during the rainy seasons in Thailand.

Mukdeeprom said he has built years of collective memory of how to adjust to bad weather, but it’s never just one thing.

“There are times you don’t have the space or time for a large light, or set up,” said Mukdeeprom who is, by all accounts, a maestro with six meter by six meter frames filled with material ranging from silks, to bounce, to diffusion. “I have learned if I get the contrast right, what colors I can and cannot pull from the image in post. I don’t like working this way, ‘fixing it in post,’ but I’ve learned shooting in Thailand what colors must be present on set when we shoot and which I can find later on.”

A great deal of the film’s natural sunlight feel comes from the way Guadagnino played with the interplay of interior and exterior through windows. Similar to Jean Renoir’s “A Day in the Country,” a touchstone film for the director, he used windows and this inside-outside balance to reflect the moods of his characters.

“One of the reasons I moved the film to where I lived is because I knew the house and I felt very strongly that place [was] informing me because it was perfect for the characters,” said Guadagnino.

Mukdeeprom credits the Italian architects for having already thought of the interior lighting design of the film and Guadagnino for having picked the perfect room for each scene – having conceived of the emotions and movement in context of the way light poured into the space. It meant that he could more effectively and naturally mimic the feel of the exterior sun, even when there was little actual sun outside.

“I’ve never had a collaboration with a director that was so natural in how the scene unfolds and how I just instinctively react based on what he is doing and what he has created in front of the camera.” Spears said it was this element of how Mukdeeprom was so in sync with the director that allowed them to be so nimble working between raindrops. “Sayombhu is Buddhist, he’s just the calmest man, and his ability to connect with the material, the surroundings and Luca, it became this quiet in the middle of the storm,” said Spears.

“Considering the conditions, it’s surprising there wasn’t more panic and I think that was largely because of him.”

How did you get involved in the Call Me by Your Name film?

Luca asked me if I would like to work with him and I said yes immediately. I hadn’t even seen the script. We had worked together before. My first film with Luca was A Bigger Splash (2015).

What is it like to work with Luca Guadagnino?

Luca is a great guy with good insights… He’s an open mind. He trusts his crew.  When I suggest an idea, he always says: “If you want to do it, just do it. Let’s try it.” Luca makes me feel like family. And so I said yes without thinking.

What resonated with you about Call Me by Your Name, and what were your first steps in figuring out your take on the project?

I bought the book before I received a script, and I liked the book a lot. Then, I received the script and I saw that it’s different from the book. I worked slow and thought slow, at the beginning, using my imagination that I had reading about what was going to happen. What it could look like. Luca already knew that I only shoot on film, so there was no question about film or digital.

Why did you decide to limit yourself to a single lens when shooting the film?

Luca suggested it and the idea of shooting with a single lens was a challenge for me. I did some research before I said yes. I looked through the script to understand what was happening and thought everything could be shot with one lens. I thought it could give a special perspective to the presentation of the story. When you make art, you don’t know what it’s going to be – you can guess from experience, but it was unknown and it appealed to me.

How did the lens cope with the different lighting and weather conditions?

It’s a very interesting time for cinematographers: everything is unpredictable because of climate change. We were shooting in Italy in the summer and it was raining!

They had an historic amount of rain… It must have been a monsoon in Thailand!

I had to light everything, especially the interiors. When the sun was really shining, the angle of the sun in Italy was better than in Thailand. Here in the northern hemisphere the angle is shorter, but the quality of light is excellent.

What was going through your mind while shooting? How did you think about the colour palette of the film?

During the shoot, only two words came to mind: ‘sunny’ and ’80s’. My task was to show images of a summer in Italy in the 80s. Being a cinematographer, I had to find a way to use all the elements of the shot to express that in the film. The film is all about nature, so the color palette is so wide. I accepted everything, whatever was in nature.

I didn’t force it to be anything.

Of course, there’s the color palette of the costumes and the set, which involves a lot of people, also. This is another type of observation that I have to do.  The buzzing flies were of course there while we were shooting. It was the right place and the right time.

The film really captures the beauty of Crema, Italy. What was your visual approach to the setting you were working with?

At the beginning, I worked slowly—I have to get my feelings about everything. At first, I didn’t have the actors or anything yet, so I began with the place, the location.

I’m not the kind of person who is after some kind of certain look, because I don’t believe in that kind of idea. If the film is set in the ‘80s, it doesn’t mean that in 1930, it shouldn’t look that way. Nature doesn’t change during just 40 or 50 years. The architecture does change, of course.

What I believe in is the momentum of everything. I try to imagine everyone can have their own view about anything, about what they’re going to do—their own interpretation.

I try to think, if I were Elio, what I would feel about things, about place. Observation is my point. I try to observe every moment. I never interfere with the work of the director and the actor because I respect that very much. I never put any of my equipment in the way. The actor should have freedom to move in the set.