Publishing the core themes of Call me by your name: what’s in the detail?

The cultural props (sets, costumes, music, etc.) in the films play a mediating role, helping us to understand the story, give us an insight into the characters’ minds and draw our attention to the cultural values of the place.

The main themes of the book/film Call me by your name are:

We often see scenes in film where the characters are reading a book. Each of these books reflects in some way their own lives, identities, sexualities and desires.

In one scene, he is holding Oliver Stendhal’s book Armance. The novel is also mentioned by André Aciman in his book. It tells the story of Octave, who falls in love with his cousin Armance. Like the theme of the film, it deals with the issue of dual gender identity. Armance is inspired by two conflicting novels by Olivier (one by Princess Claire de Duras, the other by Hyacinthe Latouche). In fact, Stendhal originally named his hero Olivier, but changed the name on the advice of his publisher in order to avoid a possible renewal of the controversy surrounding Olivier.

Octave becomes impotent after a serious accident. Many commentators have suggested that his impotence was a cover for his homosexuality

André Aciman wrote that Armance is one of his favourite stories. The significance of the novel in the film is not only the names, but also the similarity between the lives of Octave and Oliver. In fact, in the film, Oliver is shown holding this book in his hands after his first night with Elio, because he has doubts about how Elio felt and wonders if he is misinterpreting Elio’s behaviour. Tommaso Mozzati, in an article on Call Me By Your Name, says: 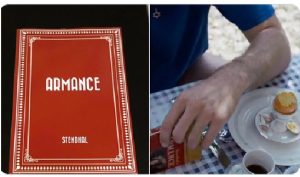 The theme of hiding

In addition to duality, the theme of hiding also appears in the book/film in various forms. It is also the theme of the short story read by Elio’s mother Annella from the French-language narrative Heptameron, written by Margaret of Navarre. Much of the story of Heptameron is about love, desire, infidelity and sex. Elio lays his head on the lap of his mother, who tells him the story of a knight in love with a princess.

“A hansome young knight is madly in love with a princess. And she, too, is in love with him, though she seems not to be entirely aware of it. Despite the friendship, that blossoms between them, or perhaps because of that very friendship, the young knight finds himself so humbled and speechless, that he’s totally unable to bring up the subject of his love. Till one day he asks the princess point-blank: „ Is It better to speak or to die?” 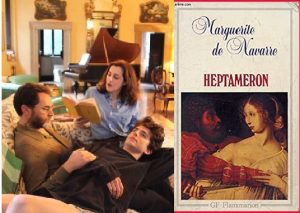 One day, Marzia asks Elio why he reads books, because he thinks that people who read books hide who they really are. Elio asks her if Marzia is hiding something from him. Marzia tells him that she has read Antonia Pozzi’s poems, which he gave her.

Like the other books in the film, the main themes mentioned so far are reflected here. Antonia Pozzi is considered one of the greatest Italian poets. During her high school years, she fell in love with her Latin-Greek teacher, 18 years her senior, who reciprocated her feelings as a very young girl. But it all turned into an unhappy love affair: her father did everything he could to prevent Antonia’s love and future marriage.

A grammar school teacher of middle-class origin, he was presumably not distinguished enough in the father’s eyes for his only adored daughter. Because she sincerely loves her father, she dares not oppose him, and the relationship, which had lasted for some time, ends – she attempts suicide. Although her family believes she was suffering from pneumonia, she died a day or two after her attempted suicide by barbiturate. (Different sources give different dates). 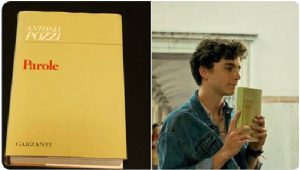