Call Me by Your Name, book and the film, are undoubtedly masterpieces, and nothing is more proof of this than the fact that it has been nominated for 4 Academy Awards. Finally, it won the Best Adapted Screenplay award in 2018.

However, in addition to the professional side, it is also worth mentioning the huge fanbase who share their love and passion for the film/book worldwide.

After the release of the film, a number of fan groups were organised on various social media sites, where members could discuss their impressions and thoughts on the film. I experienced with the Call Me By Your Name Global international Facebook group, which was created in 2018 and now boasts over 22,000 members.

Group members have shared secrets and memories that have been forgotten over the years, but which have resurfaced in the wake of a bittersweet love story, messing up their daily lives. They helped each other through rough periods, met in person, and became true friendships that last to this day.

One American superfan, Barb Mirell, saw the hundreds of entries and posts in the group and felt inspired and motivated to ask people around the world how the film changed their lives.

”I found that this multi-layered film brought back a lot of repressed memories and had some people re-evaluating their lives.”

In the end, the essays and poignant stories, edited by Mirell, resulted in a remarkable paperback book, How a Little Film Touched So Many Lives.

Here is one of the hundreds of moving stories in the book, from an American fan:

I have never been an emotive person. It takes a long time and a lot of  trust for me show how I am really feeling. Because of this, I habe often been called “cold”, “heartless” and even asexual. I can’t count the number of times I’ve been told “you should smile more”. Some don’t understand that this lack of showing emotions doesn’t mean I don’t have any.

I can’t recall a time when I have cried during a film. Until Call Me by Your Name. I cried once during the theater showing, which was during the Dad’s speech, but who didn’t?

Repeated viewings of this movie made me cry multiple times throughout, which was highly unlikely for me to do.

What is it about this film and book that turned an emotionally repressed person into a puddle of tears? I can’t say for certain. Maybe it’s the beauty of the location. Italy is stunning on its own merit. Is it the idea of the perfect summer?

Sun, books, music, and fresh fruit. Who wouldn’t fall in love with that? Or could it be that I am Elio? I am him. I didn’t notice so much while watching the film. But reading the book in which we get more of the depth Elio’s thoughts, I discovered that he is me.

I’ve had all his thoughts myself. I’ve acted like him when attracted to someone.

I’m aloof, I act nonchalant, I shun away from physical interaction with said person.

I do all this in hopes that they will read my mind and reach out to me first. But that never happens. They always find someone else to love, marry and start a happy life…without me.

I suppose, these actions on my part are the reason I’m 36 years old and without a husband. I long ago made the life decision to not have children. For various reasons, I know (and always knew) that motherhood was not for me. However, I have not intentionally make the decision to be without a companion, a partner, a lover

I also did not make the decision to be attractes to both men and women. That’s something that just happened to me and you can’t choose who you are attracted to. One would think that being flexible about gender would increase the chance of finding love. Buti t has not expecting it.

For me, at this moment, love is like Call Me by You Name: beautiful, magical, ambiguous and completely fictional. 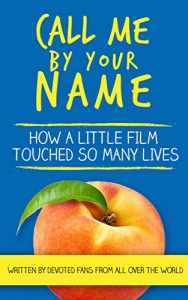 If you are interested in the book, you can order it here: ORDER HERE.