Call me by name film locations #1: Scenes from Moscazzano

Most of the film takes place in a villa on the estate of the Perlman family, Elio’s parents. The building is real, not a set. It is located in Moscazzano, a village of 800 people near Crema.

The building is an imposing structure with a patina. In the 13th century, the influential and powerful Vimercati family of Milan moved to Crema and began building this rural mansion on the ruins of a former castle, according to records. Moscazzano’s feudal record in this respect dates back to 1499. Until the 18th century, the villa underwent many alterations and transformations.

When Angela, a Vimercati daughter, married the Count of Griffoni Sant’Angelo, the estate and the palace passed into the hands of the Griffoni family in 1776. A work by the artist Finoli Bassano, depicting the castle then bearing the name of the Count’s family, survives from the early 1820s and was painted in honour of Count Angelo Griffoni Sant’Angelo, with whom the man of the Count’s family had died. The villa has changed hands and has undergone many transformations over the centuries, both in the building itself and in the impressive gardens that surround it.

It has been the property of the Stramezzi family for the longest time, for eight decades, when it was bought in 1961 by the Albergoni family, who still own it today.

They made their fortune thanks to their iron company. Francesco Albergoni, better known as Popi, was a popular botanical professor. Albergoni, like Professor Perlman in the film, had a doctorate in science. Albergoni decided to let much of the estate run wild because he planned to raise free-range rabbits. It is said that every morning the old professor had breakfast among the rabbits. Villa Albergoni was inherited by his two sons.

It has two floors and two towers – the kitchen was added to one side. 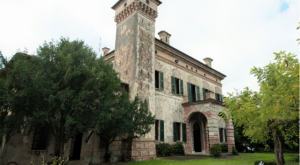 On the left is the newer kitchen building.

The property was once surrounded by a beautiful park, which has now become overgrown. The villa itself is in need of renovation – inside and out – but even in its dilapidated state it is still beautiful.

Here the professor often dined with his family and Oliver at the table set under the trees.

Luca Guadagnino, the film’s director, who lives in neighbouring Crema, knew one of the Albergoni boys, Jacopo. He managed to arrange for the film to be shot in the deserted villa. While some of the rooms in the villa were used for filming the scenes, the other rooms were used as costume and make-up rooms and hairdressing salons.  Jacopo Albergoni says that 80 percent of the furniture in the film belongs to his family.

Jacopo says that the smells of the garden remind him most of his childhood. The garden was full of pomegranate trees, but the peach and apricot trees were brought in by the film makers, a kind of film ‘prop’. Jacopo says the garden was always his father’s pride and joy.

The villa was once the jewel in Moscazzano’s crown. A watercolour still exists showing the estate in its original state. This tells us that the villa was once surrounded by an elegant park and was in fact much larger than what remains. The painting shows that where the street now stands, and the farm buildings on the adjacent plot, there was once a dam or stream with a slender bridge spanning it. According to the latest information, probably due to the popularity of the film and the influx of tourists, it has been decided to restore the park to its original state. 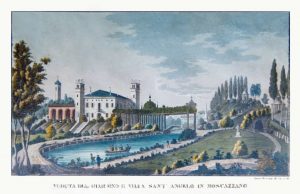 As interest in Villa Albergoni has increased, the owners recently decided to sell the property.

Currently asking €1.7 million. However, the investor must have much more capital, as the plaster is falling off in many places inside the building, and the frescoes should be restored to their original state. According to Jacopo Albergoni, the villa was already for sale, because the two brothers could only visit the house once a year, in the summer, and the maintenance costs were enormous.

They think that now, with the popularity of the film increasing the value of the property, it is worth selling it. The villa’s gardener tells us that tourists visit the villa daily to admire its beauty and to pay homage to the film and its creators.